Our first week in Costa Rica has officially come to an end, but our hearts are full. From the moment we landed, we have been welcomed with open arms and loving hearts. This first week was a bit different from the rest, as Viki Payton joined the team until our leader, Josh Hubbard arrived. For the next couple of weeks we will be commuting back and forth from the Varga Araya Corps (our home for the summer) to the Concepcion Corps and Centro Modelo (similar to the ARC programs).

We have joined the officers at Centro Modelo to work with the men in the rehabilitation program, assist with their worship services, and in renovating the Center. They also have scheduled Soccer, Basketball and Volleyball games, so we are being very active! Also, Viki and Shannon were able to visit one of the 20 New Corps locations in Esparza. It’s a beautiful thing to witness the passion the officers have in expanding the kingdom of God.

This week has already been an adventure, as we are all getting used to a lot of rain, the food and lots of coffee. We even got to see people feeding monkeys at a beach. Together we all have been learning Costa Rican Spanish and as well as from other Latin American countries, as Officers in this Territory belong to ten different countries carrying with them their languages and cultures to share with the team.

We have been so blessed by this beautiful country and the wonderful people God has placed in our lives. The people here have really taken the idea of “mi casa es su casa” to heart. From eating breakfast with the officers at the Vargas Araya Corps, to playing a great game of soccer with everyone at Centro Modelo, there has not been a moment where we haven’t felt at home. Now that our first week has ended, and Josh has joined us, we are excited to start the painting project and take part in the United Holiness Meeting on Sunday. 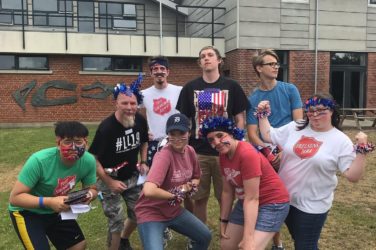 It is our 4th week here in Denmark, and there are a few words ...