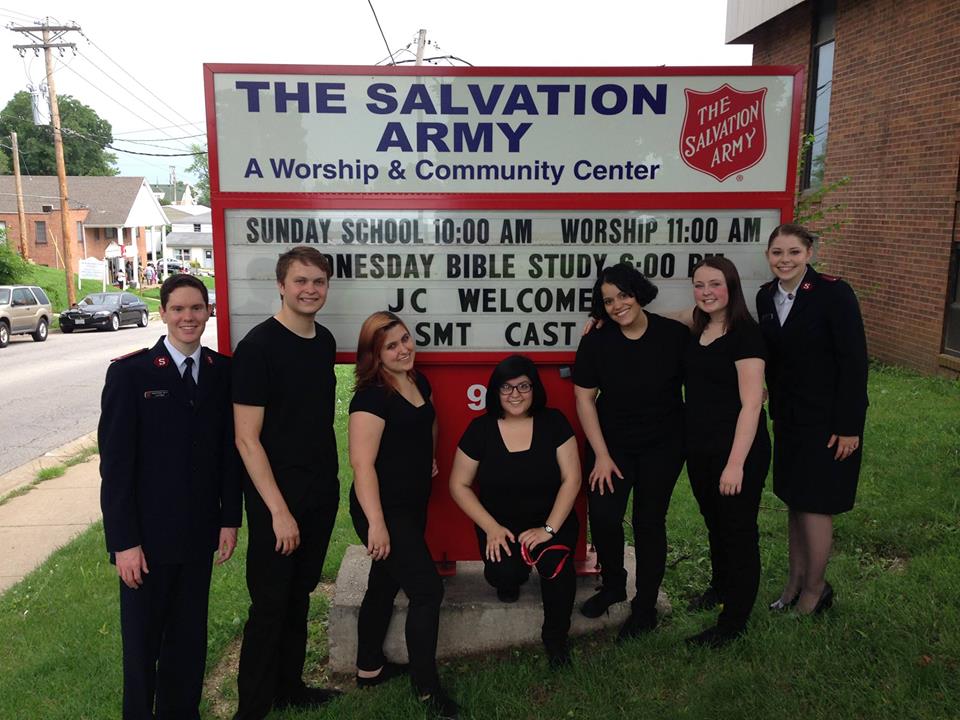 Greetings from the CAST team! I am writing to you as we depart from our last of five Salvation Army Music Camps. It was an exhausting, yet very fulfilling five days. Our first camp was Three Trails Camp in the Kansas and Western Missouri division on Saturday. The camp was beautiful, and the children were so enthusiastic and ready to hear what we had to perform. The audience responded well and really made us feel welcome. Also, Greg was invited to play his cornet in the Pep Band during the evening meeting. It was a great start to our camp tour.

That night, we left for Jefferson City, Missouri. The next morning we arrived at the corps and were able to sit in on

their adult Sunday school class. We performed our show as their Sunday morning service. The congregation absolutely loved it. They couldn’t stop laughing! Our show was a real hit there. Lt. Rachel White laughed at just about everything. We had several people tell us how our show was an amazing way to spread the message of the Bible. That corps was a real blessing and definitely boosted our confidence about how much this show is impacting people. Before we left, we treated the corps officers to lunch and got to have some great fellowship time. We then went to Camp Mihaska in the Midland division on the same day. The camp was quite hilly, which meant walking up a lot of hills, but it was beautiful. After we performed the show, a camp staff member said he was into theater, and that this was the first time he had seen theater used for this reason. We heard that the kids are still quoting some of the lines.

On Monday, we went to Hidden Falls Camp in the Indiana division. The kids and workers there all really appreciated our way of spreading the gospel. Also, while we were there, we decided that adding a song to the end of our show would close it well because it would allow the audience to take in the message they had received, so we sang “I Love You Lord” a Capella. After the show, we did an afterglow for the older kids. Our team member Sandy did a demonstration on how to do stage make-up with the campers and counselors, as we assisted her. It was a hands-on workshop, where they got to practice different techniques on each other.

Tuesday, we went to Eagle Crest Camp in the Heartland division. Before we did the show, we got to help out with their Drama and HMC TV electives. It was really cool to be on the other side of the electives and to be able to teach

the kids. We got to sit in on some of their Band/Vocal classes as well. Greg did a devotional after the show about different ways to worship God, and after he was done, several campers and staff came to Christ. It was a real blessing to see.

Our last camp, on Wednesday, was the Army Lake Camp in the WUM (Wisconsin and Upper Michigan) division. It was a great way to end our week of visiting camps. The audience was great and we absolutely loved it there. After our performance, Sandy gave a devotional about how we’ve all been called by name to serve God. We even got to help out with the Zombie Paintball afterglow. While we waited for it to start as we sat around the campfire, Lauren and I sang lots of campfire songs with the kids. Sandy participated as a Zombie with the staff. It was a really unique experience.

Over all, the camp audiences had really great feedback. They were laughing up a storm and were able to relate to the characters. The show demonstrates how even though the stories in the Bible took place a very long time ago, the people weren’t much different than us. We loved getting to see how much God was working through our performance to minister to these kids. Our next stop is the Waukesha corps in Wisconsin. We will be helping with day camp there.
-Until next time
Kayla and the CAST team

The World Missions Department is pleased to announce the 2016 Summer Teams!  Is this your year to apply? 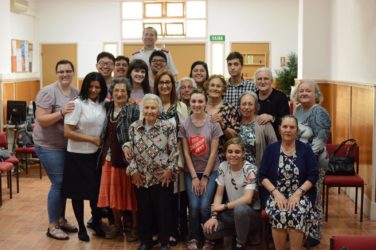 This week was our first VBS of the summer. Our team was given the task to lead the Bible classes ...