This week, the Creative Arts Service Team served as faculty members at the Wisconsin and Upper Michigan Divisional Music Camp held at Army Lake Camp. We were also blessed this week to have Joe Caddy, member of THQ’s Music & Gospel Arts Department and Director of Fine Arts, with us, helping with our rehearsals and leading the faculty chorus. We all took part in assisting with band and vocal main tracks, and faculty band and chorus. Jacob directed the Drama class, and they performed a skit called “Sin, Spit, and Sight”. It’s a comedic telling of the story of Jesus healing the blind man. Georice, Kish, and Mitchell led the Dance class, culminating in a flash mob to “One Way” in the dining hall. Sandy bounced between the two classes, providing help as needed.

CAST was invited to participate in several evening programs throughout the week. On the first night, there was a faculty talent show. Members of CAST were featured in two of the acts that night. On the second evening, we celebrated the lower section of the musical world in a program called “Beauty and the Bass”. We received an education on the evolution of the bass part in western music, from the Middle Ages until now. We also performed and enjoyed a number of musical acts, featuring the bass register.

On Thursday night, CAST was the in charge of the planning the evening program and we shared one of our shows. The campers were quite attentive to our presentation on “The Table of the Lord”. The show shared the message of how God invites us to His table, as His family members. We shared this message through a combination of dances, songs, skits, and spoken word poetry. We even taught the camp our SMT Dance “Say Yes” and they loved the songs. Based on camper and staff feedback afterward, you could say it was a roaring success. Several campers would come up to us to reenact their favorite part of the show.

After the final concert on Saturday morning, we packed up our van and headed to Gene Eppley Camp for Western’s Divisional Music Camp. We have arrived safely, and will be assisting in various roles throughout the week.

We ask that you pray for our continued ministry through the summer, and that God continues to give us the energy to keep going. 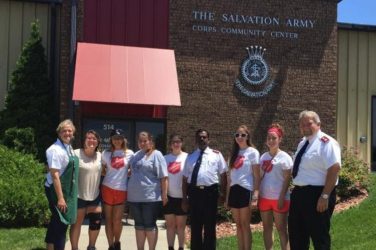 For the first week of our journey the central team headed to Janesville, WI ...

Hola amigos! Our week of music camp (and first week in Spain) has come ...