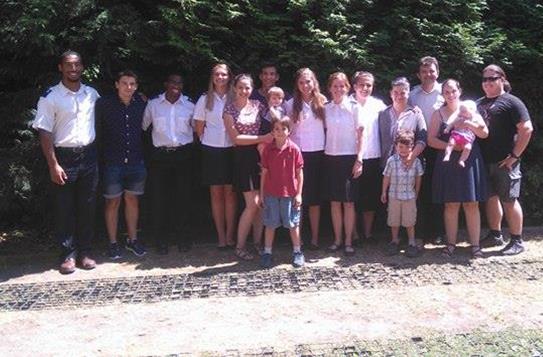 The Budapest corps treated us really well. We stayed at a hotel only 7 minutes away from the corps building, which we walked every morning. However, this was not a burden. We enjoyed starting the morning with a walk through the streets of Budapest. Because of the walk, we were able to see the city, and truly be a part of the community and its people. When we got to the corps, we were greeted every morning by the officers, and sat down to have devotions, re-centering our day around God. The corps officers were very welcoming and treated us like we were a part of their family.

This past week we went through the VBS lessons of the armor of God, and the kids completed their crafts associated with each corresponding lesson. The kids especially enjoyed the action songs. Despite the language barrier, we were able to teach the kids “making melodies”, and “walking in the light”. Their favorite, however, was Summer leading the “Oo-ah-loo-ah” song. Our team also decided to teach the SMT dance to the kids, which went over really well. The kids were able to pick up the dance steps thanks to our team dance captain, Kayla. It was easy to see they were eager to learn the dance. Because of our location, and the ongoing Euros (soccer tournament), the kids constantly played soccer. Two days during the week, we were given the opportunity to play on a local private soccer field in the city. Everyone, including the team, was involved in the game at some point. And MANY injuries were faked, just like the pro athletes do during games. At one point there were at least 10 players rolling around on the ground holding their shins, including Andrew and Stephen.

The officers at this corps planned a very special outing with the campers to a nearby island, where we were split into teams of 5-7 and rode the 4-wheeled bikes around the island. Although some of the kids were too small to reach the pedals which forced our team to pedal harder, it was fun to bond with the kids. Even though we were not at the corps, we still gave a brief Bible lesson and sang our action songs in the park. The kids sang louder than they ever have before, giving everyone who was near a little light of God.

There was a family at the corps who really stuck out to us during this week. They were always giving a helping hand during VBS. We were invited to their house to have dinner, and we were able to hear what God has been doing in their lives. It was clear to see that they all loved Christ, and focused their entire lives around Him. We were told about a ministry they are involved in, which reaches out to motorcyclists who are very often put within a very constricted style of living. By speaking about God and what He has to offer, this ministry talks to motorcyclists around the country.

All in all, this location touched our hearts deeply, from the city, to the kids, to the officers and to the families at the corps. On Sunday, we were in charge of the meeting. Summer and Andrew gave their testimonies of how God has worked in their lives. Michelle preached on what it means to stand with the armor of God. Caitlin, Summer and Michelle were also able to play in the band there! With the team, the kids did the dance they learned and sang songs in both Hungarian and English. It was a great day simply worshiping God and praising who He is.

We are very sad to leave. Our hearts are full and we’ve become quite attached to our family here at the Dobozi corps. We have felt and seen God here! But we know that God has more planned for the summer. We are headed out of the city to a little town called Gyongyos, where we will again be able to conduct a VBS in a gypsy village.

Team Moldova arrived and was into ministry right away with two day camps, mobile ...