Team Japan has been having a wonderful time during our first week here! Upon arrival, we met with Major Brenda Luscombe and our two translators, Aika and Makoto. They have both been extremely helpful in navigating the language and cultural differences that we find here in Japan.

Our first full day, we went to the Shibuya corps and participated in their monthly Over 60’s Club. We were treated to some traditional Japanese dances and then were asked to dance with them. With the aging population in Japan, many corps have Over 60’s Clubs in order to reach out to the people of their community.

Our second day, we went to the port city of Yokohama and learned how to make a version of “Japanese pizza” called okonomiyaki. It was great to be able to interact with the mothers of the corps. Then, in the afternoon, we were able to play with some of the children from the neighborhood in the park and share some games together. This corps, like most corps, is not particularly large in number nor recognized for what the Salvation Army actually is, but has an impact in their community by simply being good neighbors. Because of their proximity to the park, the corps bathroom becomes an opportunity to have kids come into the corps building or to have a safe place to stay when it begins to rain.

Our third day, we visited the Kanda corps. This corps is in the same building as the THQ. We were blessed to be able to lead a regional youth night sharing in some games, curry rice dinner, and about our own lives and some of the odd aspects of American culture that may not be as well known outside of the USA.

On Saturday, we took the Subway outside of the city of Tokyo to the small suburb of Nishiarai. Because most corps in Japan do not have employees, the corps officers, who often have more than a single appointment, are left to do all of the work. We assisted the corps officer in handing out announcements about the following Sunday service with a War Cry as the corps would be celebrating their 85th anniversary the following day.

Sunday, we took park in the Holiness and Salvation meetings. Lt. Colonel Maynors, the territorial commanders originally from USA East territory, gave the sermon during the Holiness meeting. Taking part in a meal or snack after a service is quite common and we were blessed to be in community celebrating this historic day with the Nishiarai corps.

We have been so well accommodated since coming to Japan and we are extremely blessed to be here to grow in community and the relationships that the Salvation Army has with people outside of the Salvation Army. Please continue to pray that relationships will grow and that God would use us to expand His kingdom here in Japan. We thank God that our health has been relatively healthy and that our bodies are starting to become more and more accustomed to the 14 hour time difference! 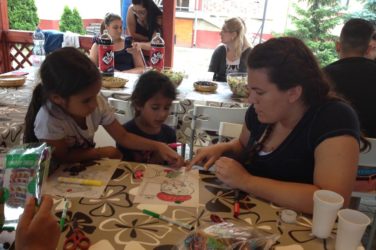 Szia (Hello), This week in Hungary was extremely busy for our team. Before we ...

Week three in Costa Rica can be described in three words. Glory, filled and ...

Lions and tigers and bears, oh my! But that was last week, so we ...